We approached the MIFGS event management and were able to secure three adjoining sites in the Great Hall of the Royal Exhibition Building. The whole of the centre site was allocated to the Ichiyo School and the other two sites were shared between the Sogetsu and Ikenobo Schools on the left and the Ohara and Shogetsudokoryu School on the right side. 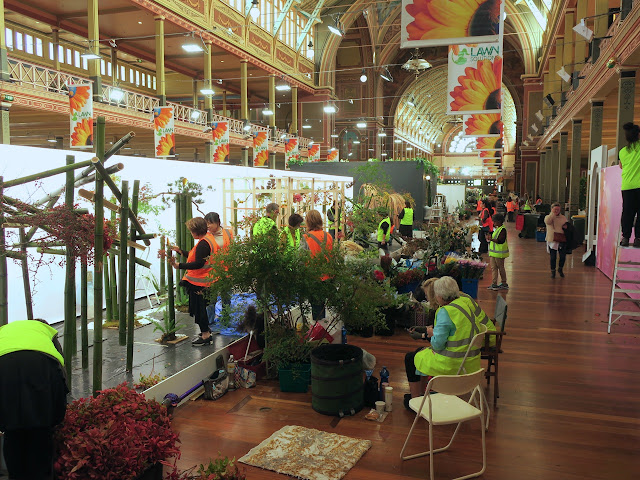 This photo shows the installation work well advanced on the third day of on-site preparations. At this stage fresh materials were being added to the structures created by each of the schools. The theme that had been chosen was 'Green Bamboo and Autumn'. 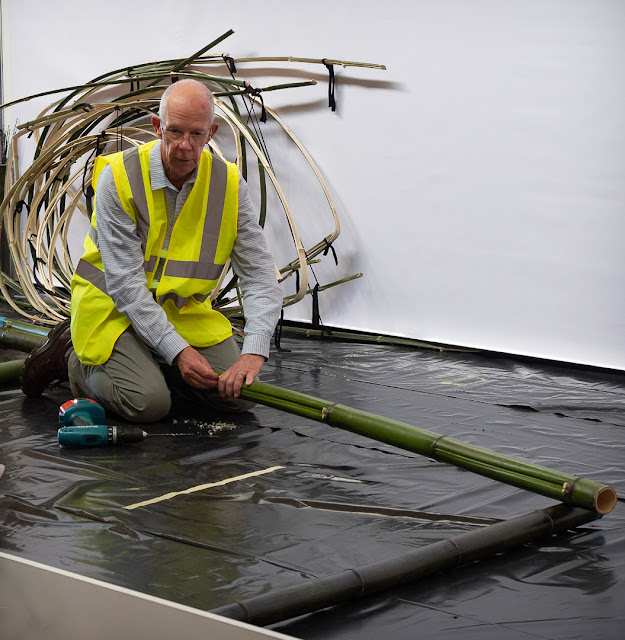 The beginning of the structural frame for the Sogetsu School installation was done on the floor. 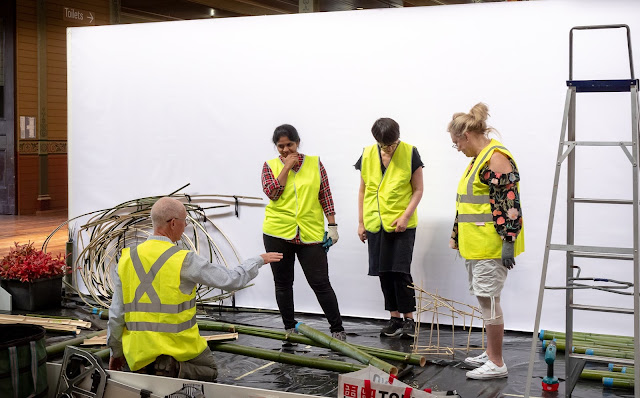 The team worked to a construction schedule that had been developed from the design plans. 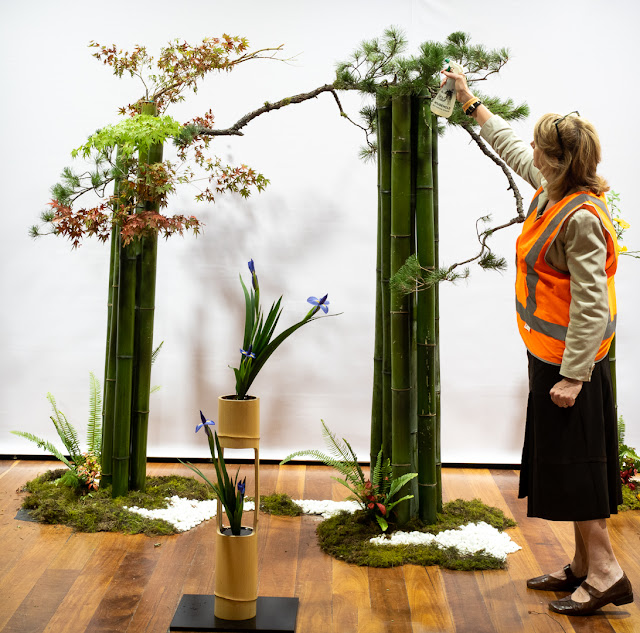 The Ikenobo School team created strong vertical forms with bamboo and then added fresh materials in a naturalistic manner. 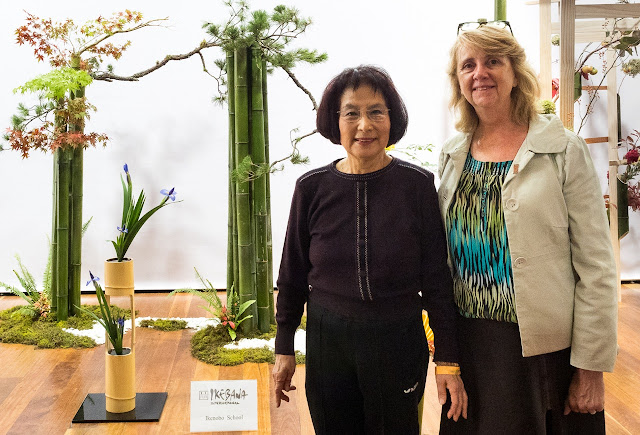 Still smiling after all that work. 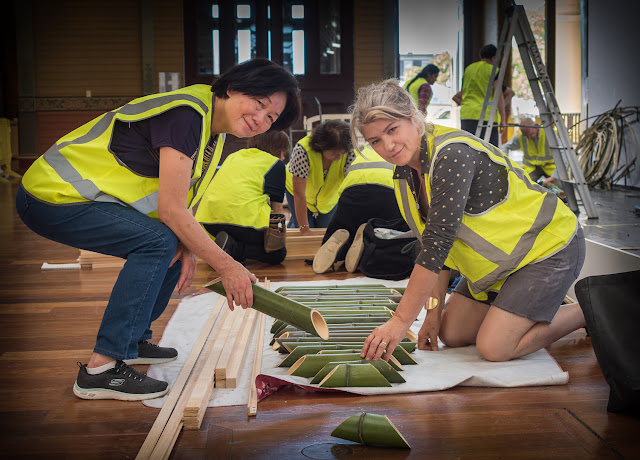 The Ichiyo School members here are sorting ikebana vessels that have been cut from lengths of green bamboo. 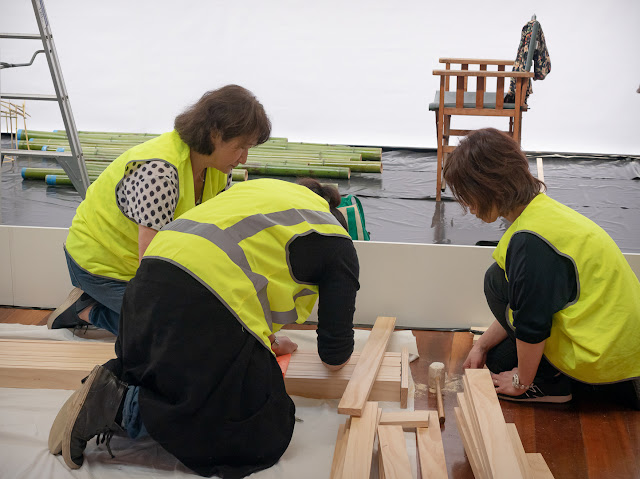 The principal work of their structure was an arcade of Torii gates that snaked through the centre of the site. In the centre of this photo, Iemoto Naohiro Kasuya leads the construction work. 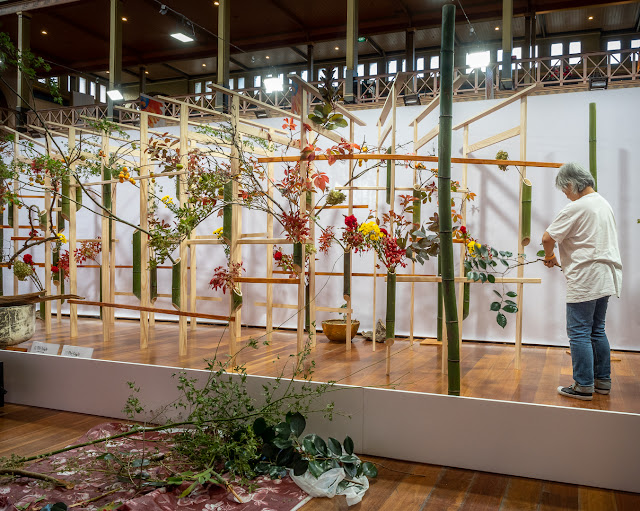 Fresh autumnal materials were later added to the bamboo vessels that had been attached to the structure. 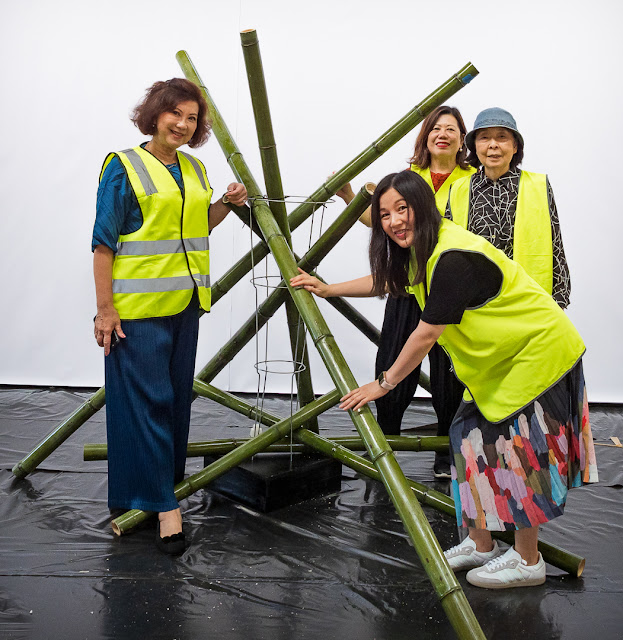 Here are the members of the Ohara team establishing the base structure of their installation. 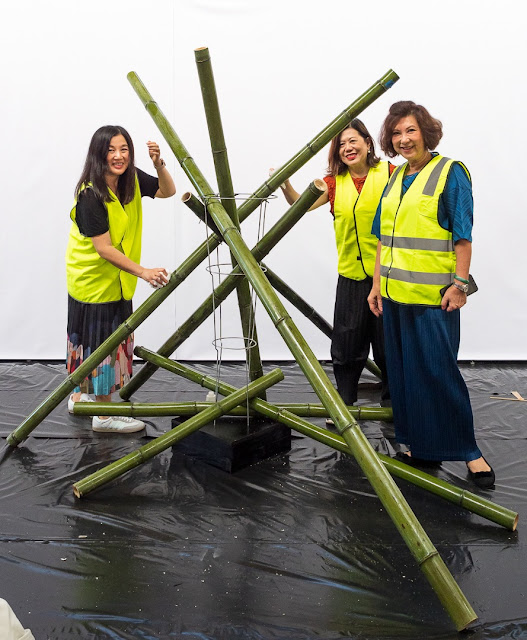 The bamboo poles are supported in the centre and are secured to each other. 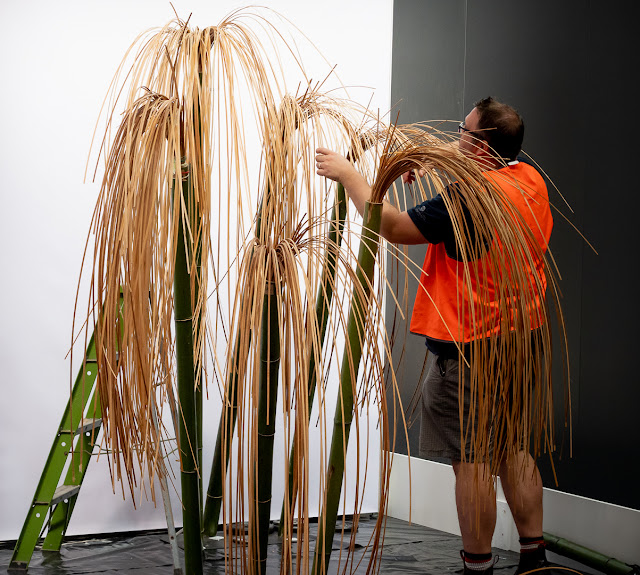 The Shogetsudokoryu School installation consisted of six irregularly arranged bamboo poles that leant forward and slightly to the left in the space. 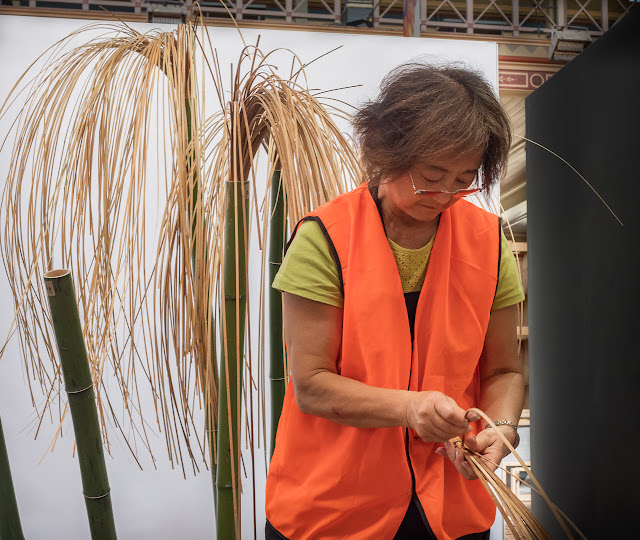 These then had very fine strips of bamboo added at the top which cascaded forward. 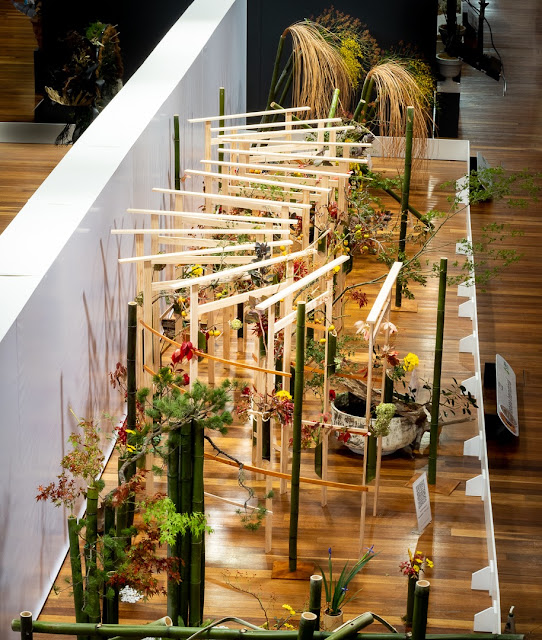 This elevated view from the balcony looks down the length of the site. The angle made it impossible to include the Sogetsu installation. 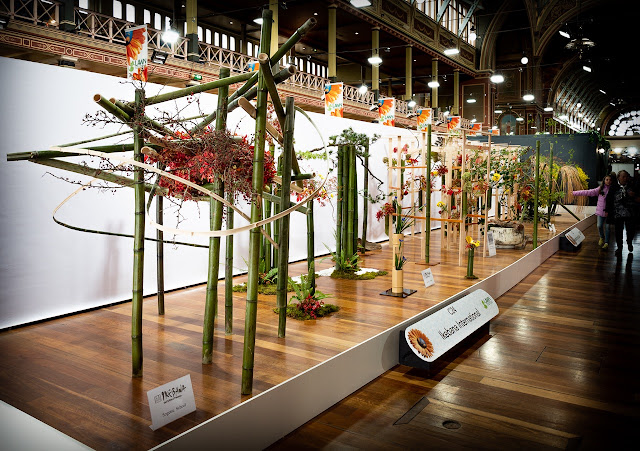 View from the east end of the site. 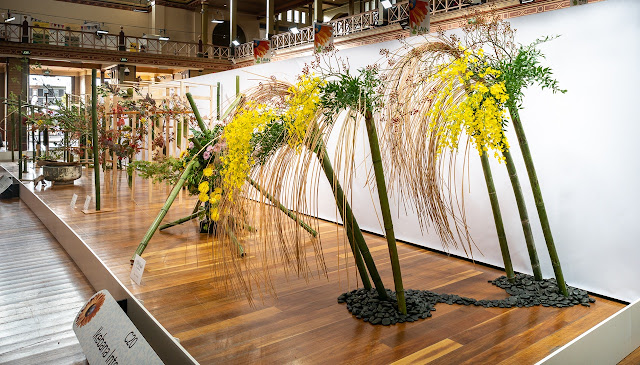 View from the west end of the site. 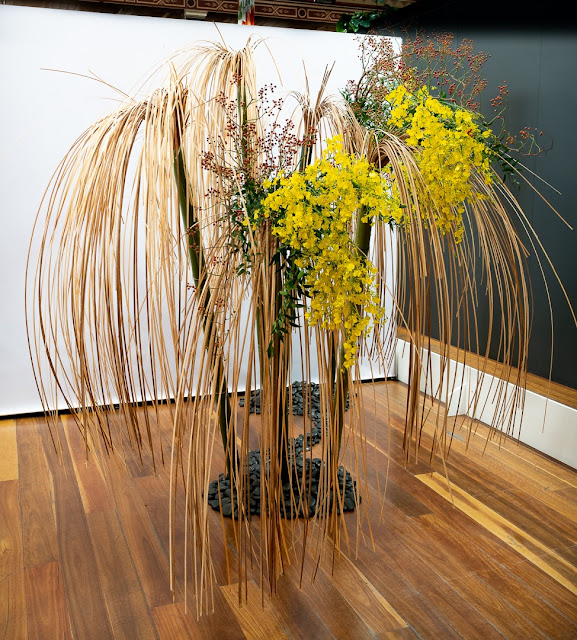 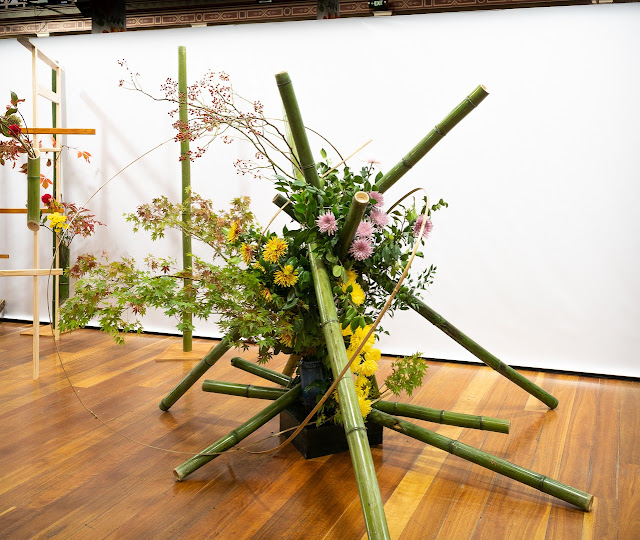 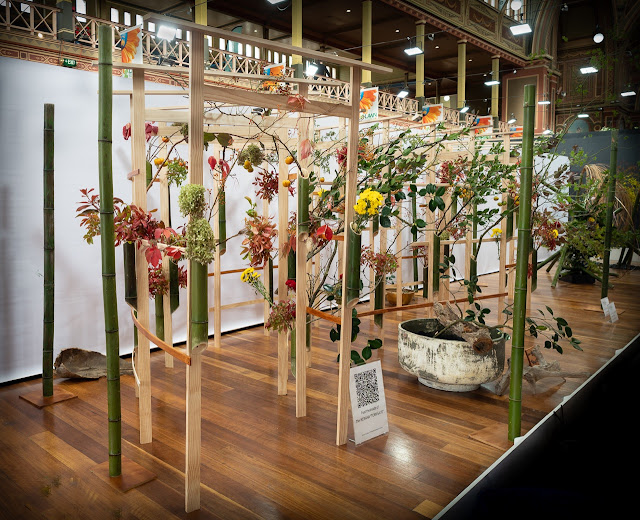 The Ichiyo School installation from the left side. It was too wide to be photographed from the front. 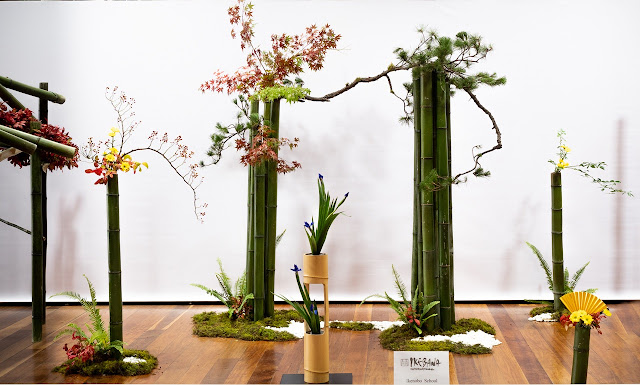 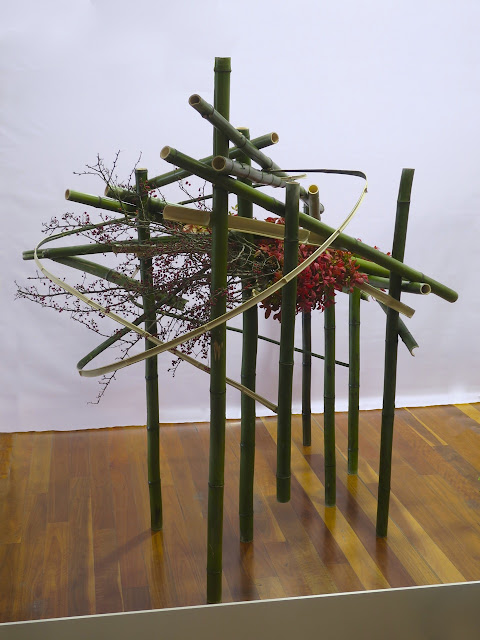 Below are two links to a video made by Iemoto Kasuya walking through the Torii structure. If you go to the first link you will need to scroll down to the bottom then click on the image of the Torii structure:
https://www.instagram.com/ichiyomelbourne14/
On the second link the video is in the first row of photos:
https://www.instagram.com/naohirokasuya/

On the last day of the Flower and Garden Show an ikebana demonstration was held with two members representing each of the five schools represented in Melbourne. 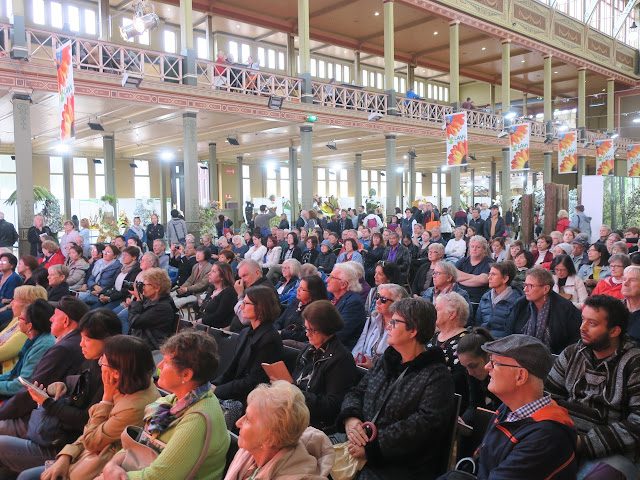 The demonstration took place at the western end of the Great Hall of the Royal Exhibition Building in the presence of our co-patrons the Consul General of Japan, Mr Matsunaga and his wife Mrs Matsunaga. It was one of the best attended events on that day. 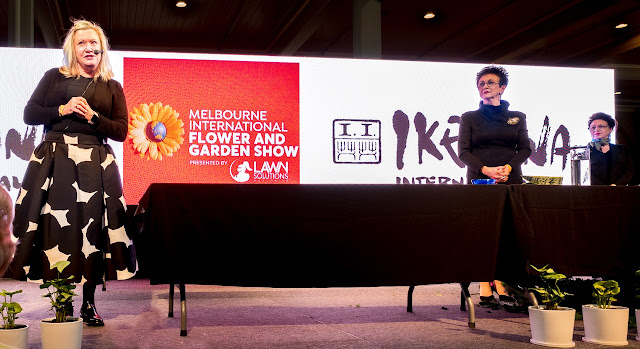 Julie Ireland was the presenter for the hour-long event. In this photo with the Sogetsu team... 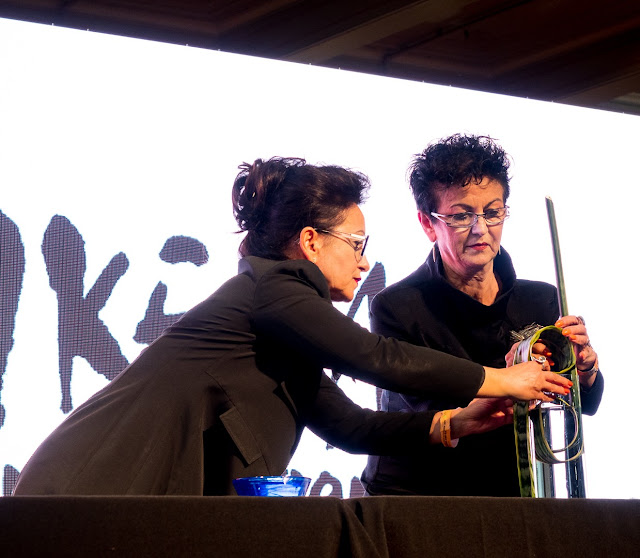 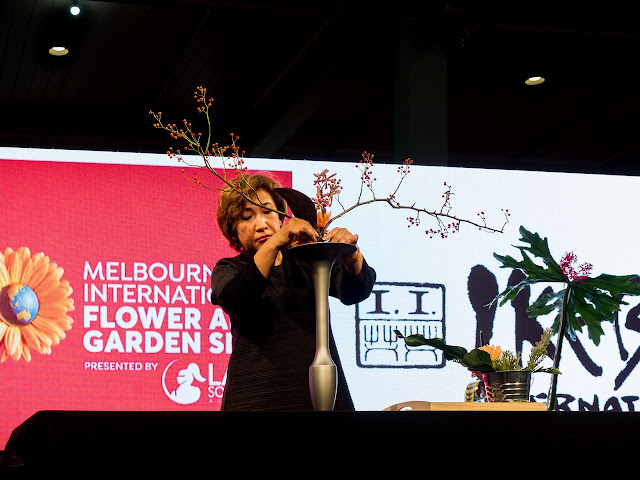 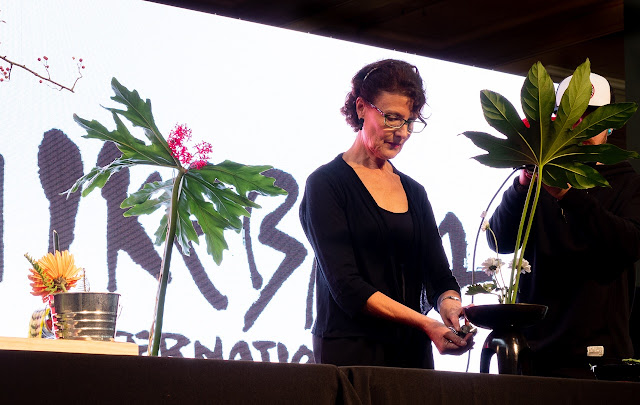 The Shogetsudokoryu School team were Rachael Lok and Chieko Yazaki, the head of school. 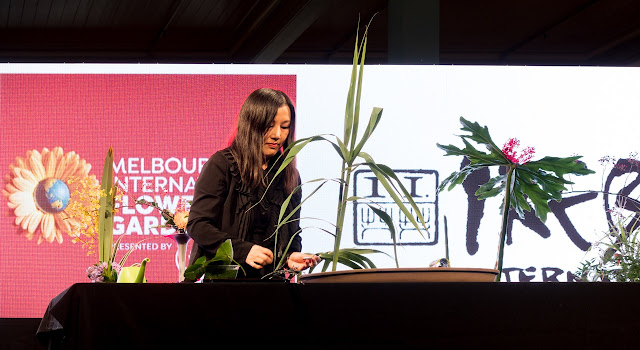 The Ohara School was represented by Lyn Wong... 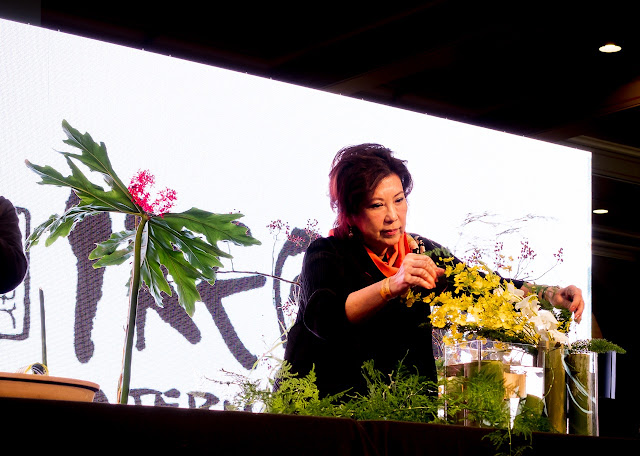 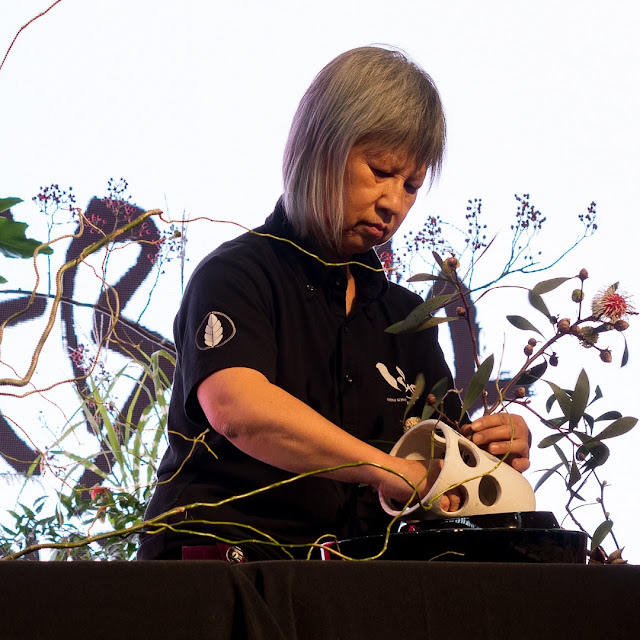 The Ichiyo School was represented by Kaye Wong... 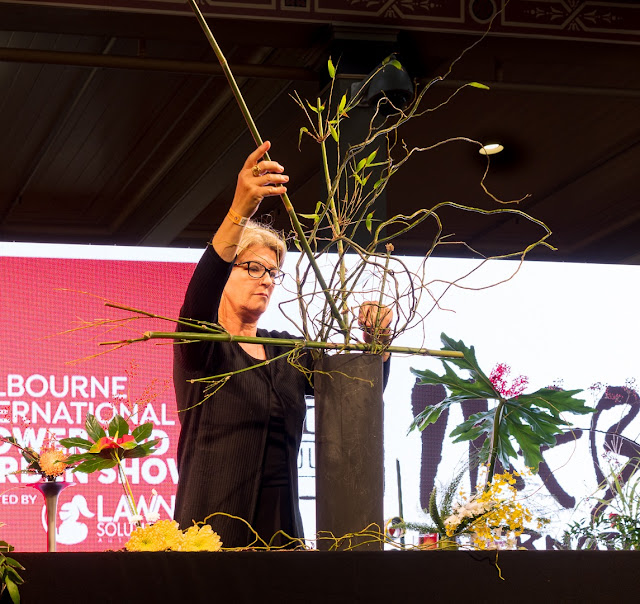 Unfortunately both time and the very bright LED screen behind the arrangers made photography of the individual works impossible.


Photography was a significant challenge at this event and Helen Marriott is to be congratulated for these great photos.

The next blog posting will cover our 60th anniversary luncheon, with demonstration by Iemoto Kasuya and a workshop he conducted for members of Ikebana International Melbourne, Chapter 29.

Posted by ikebana International Melbourne at 17:13