On Thursday 28th May, the Consul General of Japan, Ms Keiko Haneda invited some special guests to a Japanese Cultural Experience and luncheon that was held at her official residence. Ikebana International was asked to provide some arrangements, an Ikebana demonstration and a workshop for the guests before lunch. The Urasenke Tea Ceremony group participated after lunch. Invited guests as well as the presenters enjoyed the experience of these expressions of Japanese culture. 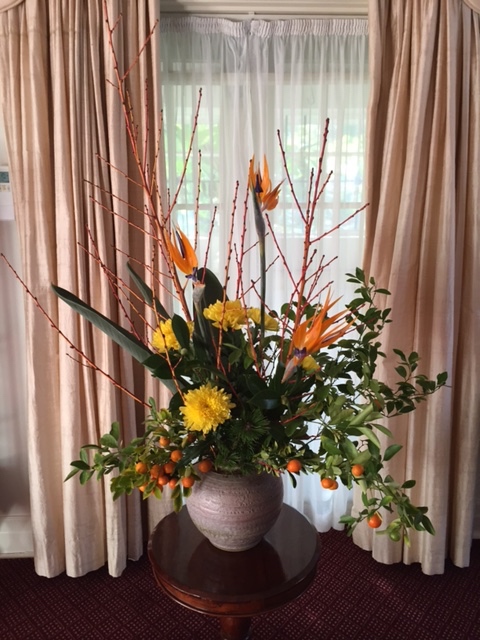 The welcoming arrangement was created by Chieko Yazaki of the Shogetsudokoryu School. 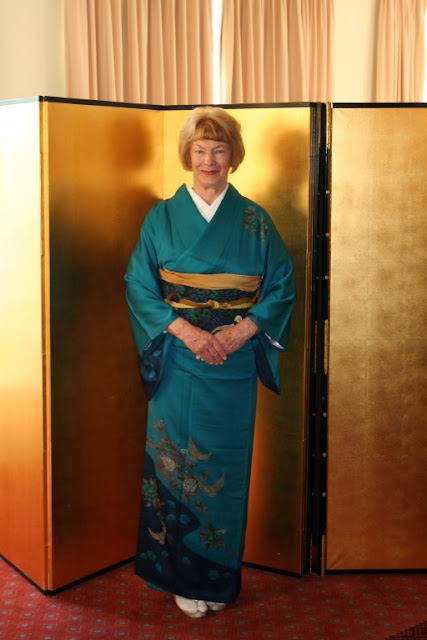 Helen Gray, the President of I.I. Melbourne, volunteered to wear a Kimono and was dressed expertly by the Tea Ceremony ladies.

At the meeting on 14th July our guest speaker was Mr Bruce Argaet, president of the Waverley Bonsai Group, assisted by Mr Bruce Wensor, the group's secretary. 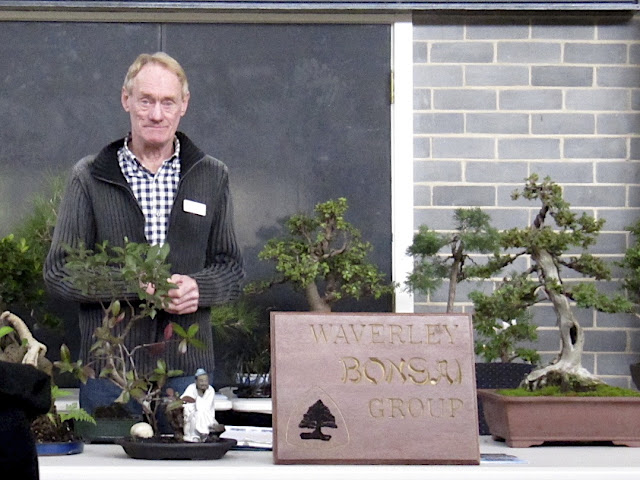 In the photo above Mr Argaet is demonstrating what not to do. That is, decorate bonsai in its pot. A figurine such as the fisherman in this image may be placed on the table next to the pot but not on the soil. Members were interested in the high degree of correspondence between the principles governing Bonsai and Ikebana practise. Below are two spectacular examples of Mr Argaet's skill in the art of Bonsai. 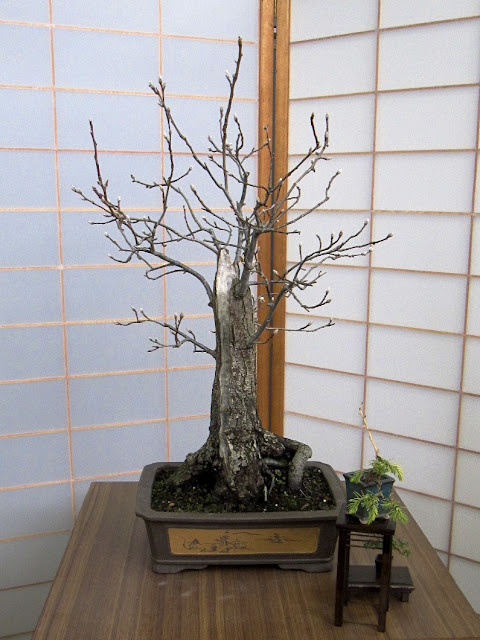 A manchurian pear tree with a split trunk, as though it had been struck by lightning. 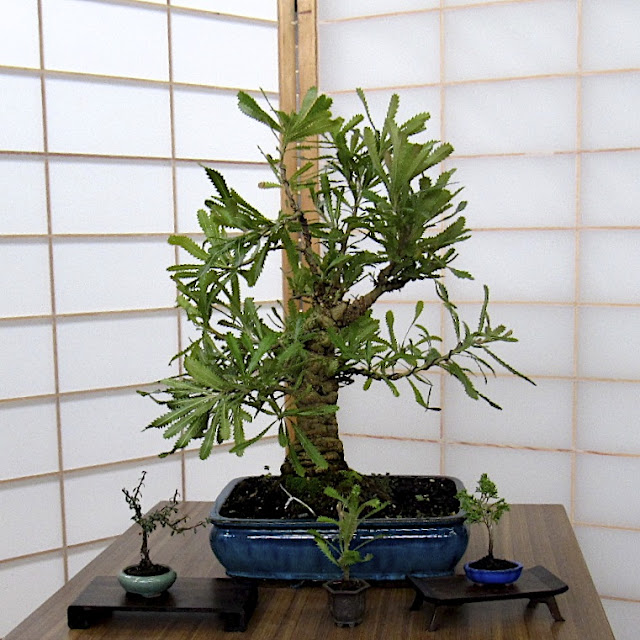 The larger tree in this photo is a Banksia with very beautiful, rough, textured bark.

After the presentation Mrs Aiko Nakada, Head of the Ohara School in Melbourne, gave a demonstration of a moribana arrangement representing a tree in winter. 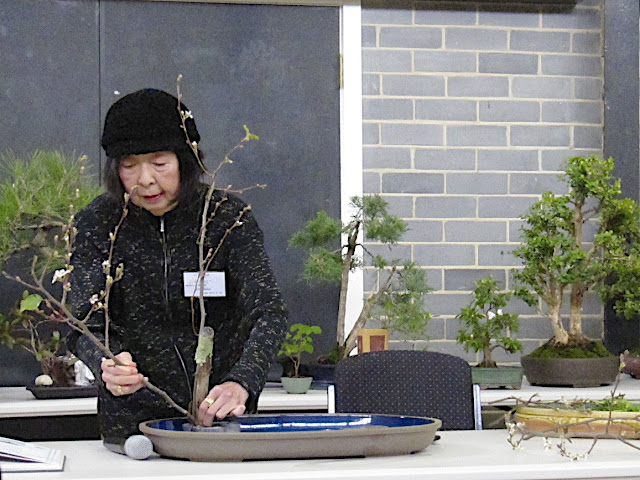 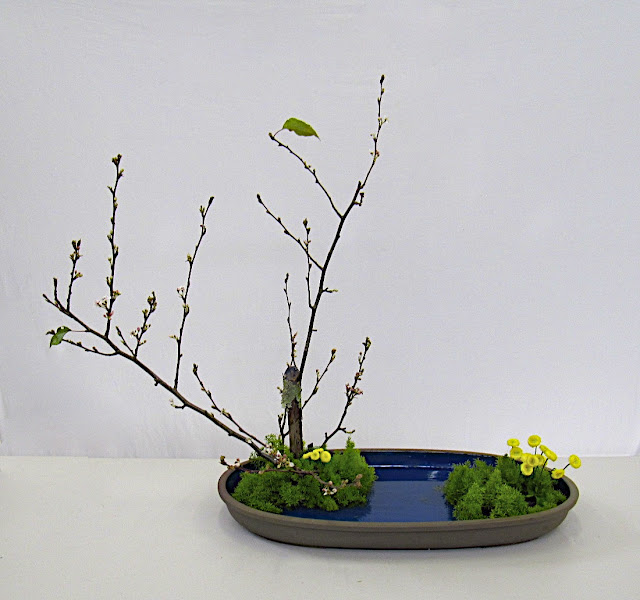 The completed work with flowers added. 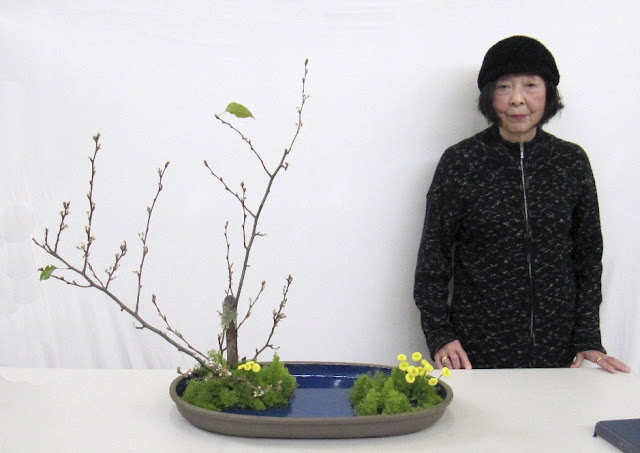 Some members made ikebana to complement the Bonsai theme of the meeting, which can be viewed by clicking on the blue text, Member Photos.

Posted by ikebana International Melbourne at 18:14 No comments: